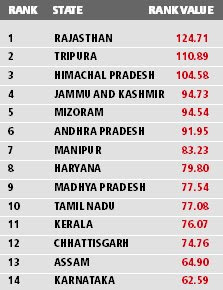 Ravish TiwariPosted online: Wednesday, June 11, 2008 at 0238 hrs Print Email
New Delhi, June 10: For the first time in its four years in office, the Centre has come out with an official performance report on the implementation of UPA’s flagship programme the National Rural Employment Guarantee Scheme (NREG) by state governments.

The report, however, came as a wake up call for the Congress-led UPA Government at the Centre, as the BJP ruled states have been ranked above most Congress and Left-ruled states. With the Parliamentary elections due next year, the results could prove to be yet another set back for the Congress which had floated the pro-aam admi scheme with an eye on electoral benefits.

While Rajasthan is ranked on the top of the table with 124.71 points to its credit, the Congress-led Maharashtra, the first state to implement the scheme, is placed at the bottom.

Even the Left-ruled states, which take partial credit for the pro-aam aadmi scheme, barring Tripura — which ranks second for implementing the scheme successfully in three of its four districts — have failed miserably. While West Bengal ranks 22 out of the 27 states, Kerala has not done too well either.

For the BJP Himachal Pradesh and Madhya Pradesh have also done well to figure in the top ten. (See chart).

However, given the tricky issue of centre-state relations, the government officials involved in ranking the states’ performance say the survey was not carried out for casting aspersions on the state governments’ intentions in implementing the scheme but a measure to provide a benchmark for individual states that would act as an “incentive” to keep improving.

“The objective rankings will be useful for all states and would act as an incentive for them to improve on their performance by adopting ways of implementation of better ranked states,” said a senior official of the Rural Development Ministry that administers the scheme at the Centre.