They're considered untouchable. One Yemeni saying goes: “Clean your plate if it is touched by a dog, but break it if it’s touched by an Akhdam”. 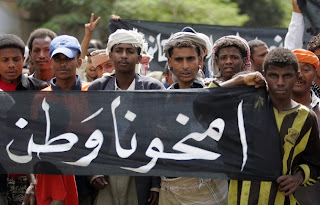 Houses made of refuse, families as large as 15 living in one room, children eating what appears to be dirt, pools of disease-laden water, piles of garbage and human waste buzzing with flies, the stench. The scene followed Aisha Sulaiman even after she was far away. She couldn’t forget it.

It is a place where children have gotten high snorting crushed glass. They
beg barefoot on the city streets – the soles of their feet callused and evidently immune to the blazing asphalt, fired by the incessant Yemeni sun.

Sulaiman, like many of the shantytown residents, belongs to the lowest
social caste in Yemen, the Akhdam. The Arabic word Akhdam means servants, and for centuries they have felt discrimination and isolation from mainstream society.

Though conditions have improved somewhat over the past few years, many in
mainstream society still stereotype them, considering them lowly, dirty,ill-mannered and immoral.

Even their plates are considered dirty. “Don’t eat with the Akhdam because worms come out of their plates,” the saying goes.

While there is no official record of the number of Akhdam in Yemen, they are considered to be the country’s largest and poorest minority. Unlike all others in Yemen, they do not belong to a tribe. They are poorly educated and are not allowed to marry into higher social castes.

Legends of Akhdam origins abound. The most credible is that they descend from Abyssinian soldiers who stayed in Yemen after a failed invasion in the sixth century AD. The soldiers, from ancient Ethiopia, were so hated they were forced to accept the worst jobs, such as transporting and disposing of human sewage and collecting garbage.

Today, the most common job for male Akhdam is street cleaning. They also work as porters, foot soldiers and shoemakers. Women and children beg.

Sulaiman was considerably better off than most because of her tenacity. Some of her relatives don’t believe women should be educated. They think women should sit at home, get married and have children, she says. But Sulaiman resisted and is halfway toward completing a university degree in philosophy. She is also determined not to have a large family that could lead to economic ruin.

Along the way, she has become a human rights trainer and educator, fighting for the rights of other Akhdam women and children who she believes suffer most. Her goal is to help the women become more self-confident and aware of their rights.

Many Akhdam do not share her hope for the future.

Tears come easily to the weathered eyes of Sai’ida Bin Sa’ad Ahmed Souhaib. She, along with five members of her family, lives in a one-room shelter in the Bab Al-Yemen (Yemen Gate) shantytown, one of the largest of 11 shantytowns in Sana’a.

Souhaib, a Yemeni, had a good job and life in Saudi Arabia in the 1970s but was forced to return to Yemen after her country supported Iraq in the Persian Gulf war. This was the fate of countless thousands of Yemenis. She returned, minus a husband who died there, and with no means to support her family.

“Now when I get hungry, I simply go out and beg,” she says. “All my children are on the streets.”

Souhaib and others in the shantytown say they are treated with contempt
outside their community.

Rawsha Hassan, 20, is another woman who lives in the Bab Al-Yemen shantytown. She, her parents and most of her 13 siblings live in a ramshackle
shelter there.

Hassan’s mother is a street sweeper in the center of the city. Her father, a former security guard, can no longer work. He can’t see well because of surgery gone wrong, she says.

Hassan’s sad, tired eyes peek through her luthma, a black veil revealing only the eyes, worn by most Yemeni women in public. She gazes at her dirty, dreary surroundings in the shantytown. She doesn’t want to bring children
into this world, she says.

In the shantytowns, men make important household decisions, even though, in many cases, the women and children bring in most of the income by begging.

Even the poorest families spend a significant amount of their money on qat, an amphetamine-like mild narcotic shrub that is chewed by men and women daily.

Hassan, like her mother, used to sweep the dusty streets of her capital city. But she stopped when a male cousin, also a sweeper, working the night shift was hit by a car whose driver didn’t even stop to look. Her cousin is disabled. Hassan now works as a janitor at a human rights organization. Although she makes less than her salary as a sweeper, she is happier.

Hassan would be even more content if she could continue her education. While in fifth grade she stopped because, as she recalls, her father told her school is not for girls. Also, Akhdam children are often rejected in schools for the same reasons adults are rejected in society, because they are considered unclean and immoral. Hassan is trying to get literacy training without her father’s knowledge.

Akhdam often have to resort to secrecy. While they are proud of their background among their peers, they usually do not advertise their social caste to outsiders. One successful Akhdam doctor, who has worked in a local hospital for years, does not reveal his social status, afraid he will lose his patients.

Officially, there are efforts to help the Akhdam. The Yemeni government is building a new housing project financed with international aid, says Noor Ba Aabad, assistant to the deputy minister of social affairs and labor.

There have been reports that owners of expensive villas near the housing
project intend to sell out because they don’t want to live near the Akhdam.

Ba Aabad, who has worked on women’s, children’s and poverty issues since
the 1970s, says she thinks the most important way to help the Akhdam is to
integrate them into mainstream society and improve their education.

While mainstream society is becoming more accepting of Akhdam, she says,
Akhdam have low self-esteem. It will take time to erase the effects of centuries of stereotyping, she says.

Society as a whole has to change its beliefs about Akhdam, says Jonathan
Puddifoot, country representative with Care International in Yemen. But the most disadvantaged group in Yemen has to find a way to rise above its
self-perceptions.

“The prejudice keeps them down,” he says, “and they keep themselves down as well.”
எழுதியது எழில் நேரம் Saturday, June 11, 2011